T cells may explain sustained protection against severe illness from COVID-19, even when antibodies wane 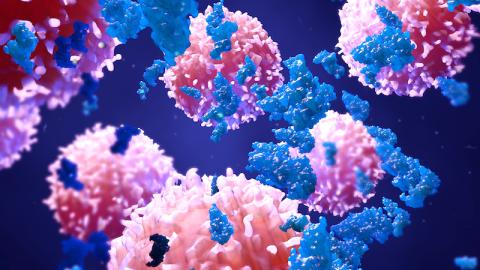 Latest findings from the PITCH study suggest that continued protection against severe disease from COVID-19 in fully vaccinated people may be largely down to a sustained T cell response.

Both infection and vaccination, alone or in combination, generate protective antibody and T cell responses against COVID-19. However, the lifespan of these responses – and therefore protection from disease – is still being understood, and is crucial to ongoing decisions about how best to protect the population.

At the same time, being able to identify those people that are less likely to mount an immune response is vital to inform additional interventions for this group, such as extra booster doses and monoclonal antibody therapies.

The emergence of new COVID-19 variants and resulting waves of infection has clearly shown the limits of vaccine effectiveness against infection. However, protection against severe disease has been well maintained throughout the recent Delta and Omicron waves. This study set out to understand the underlying immune mechanisms driving this protection. In particular, the team wanted to test a theory that T cell immunity is responsible for lower rates of hospitalisation and mortality during the Omicron wave compared with earlier variants, despite Omicron’s high mortality in unvaccinated populations.

Their findings, published as a preprint (and therefore not yet peer-reviewed), used data from 684 healthcare workers over six to nine months following two doses of Pfizer or AstraZeneca vaccine, and following a subsequent Pfizer booster dose.

They found that the dynamics of the two distinct types of immune response (antibodies and T cells) differ in terms of how well they are maintained after vaccination, with T cell immunity remaining strong over time, while antibodies wane relatively quickly. In fact, they found no decline in T cell responses over time, regardless of the type of vaccine given.

All immune responses were stronger in people who had previously caught COVID-19. However, the data showed that there was still a benefit of a third vaccine dose for this group (predominantly in terms of boosting T cells). Overall, the presence of both a T cell and antibody response gave the greatest protection from infection and severe disease.

The researchers concluded that maintenance of T cell responses over time and against variants of concern is likely to account for continued protection against severe disease seen in recent waves.

The study was funded by the Department of Health and Social Care with contributions from UK Research and Innovation and the National Institute for Health Research through the UK Coronavirus Immunology Consortium (UK-CIC).